What Are The Holes On A Bearded Dragon’s Head?

Bearded dragons come in a range of hues and are interesting creatures. They have amusing personalities and may be a lot of fun to watch. One thing about bearded dragons that isn’t immediately evident is … 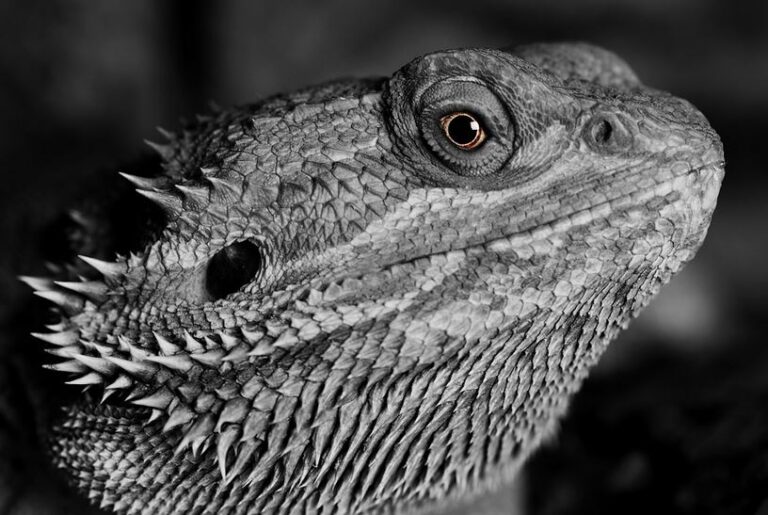 Bearded dragons come in a range of hues and are interesting creatures. They have amusing personalities and may be a lot of fun to watch. One thing about bearded dragons that isn’t immediately evident is what those openings on their heads are for.

After reading this post you’ll be able to understand what these holes are and how they affect your bearded dragon’s appearance.

To answer the question, the bearded dragon’s ears are openings in the head that are farther back than the eye and approximately halfway down between the eye and the mouth corner. A thin membrane recessed across the entrance may be seen if you gaze inside them. The tympanic membrane is this.

If you look closely, you’ll notice a very thin protective covering just within the aperture that they may shed along with the rest of their head. Their nostrils are the smaller ones on their snout.

What Are The Two Holes on The Side of A Bearded Dragon?

While walking or scratching on tree branches in the wild, the keratin or lipid secretions of the femoral pores spontaneously fall out. However, things do not always proceed as nature intended in captivity, and these secretions may remain in the pores, creating an impaction and maybe a bacterial infection.

If the stuff is pouring out of your bearded dragon’s pores, there’s a good likelihood they’re clogged. Waxy substances would be transparent or slightly yellowish with minor obstruction.

However, if the obstruction is severe, the material may solidify or become yellow, orange, or brown in color, filling the pores.

Why Do Bearded Dragons Have A Dot in Their Head?

The parietal Eye is a third eye found in bearded dragons. This photo sensory organ is a grey dot on the top of their heads, between their eyes, that detects changes in light and regulates their temperature in order to detect assaults from above.

It is also known to stimulate hormone production and aid in thermoregulation. The lens, cornea, and retina of the parietal eye are all present. The third eye of the bearded dragon does not see pictures. Instead, this eye detects light by a biological process.

It appears as an opalescent grey patch on the tops of the skulls of certain lizards. On a newborn bearded dragon or a young bearded dragon, it might seem clear. Some people perceive various colors, but if you have a bearded dragon, you should go to the doctor if you are concerned since it might just be a discolored scale.

Interesting Reads: How to stop bearded dragon from seeing its reflection

What are the Dark Spots on a Bearded Dragon’s Head?

Freckles can emerge on a bearded dragon at any time, although they are frequently caused by shedding. If a portion of a scale is taken too early during shedding, it will not develop properly, leaving a little black area, or they might just be dirt picked up in or out of your bearded dragon’s habitat. Giving your bearded dragon a bath is the best method to see if it will come off.

How Many Mealworms To Feed A Bearded Dragon?

How Long Can A Bearded Dragon Go Without Heat?