How Fast Can a Bearded Dragon Run 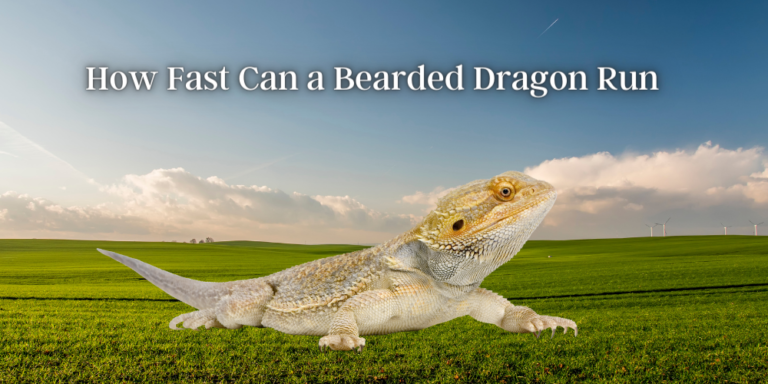 In fact, when threatened, some bearded dragons have been known to take off at full speed and even jump over obstacles in their way. So if you ever see a bearded dragon running around your backyard, don’t be too surprised – they’re just doing what comes naturally to them.

Bearded dragons are a type of lizard that is found in the wild throughout Australia. They are usually gray or tan in color with black stripes running down their backs. Bearded dragons make popular pets because they are tame and friendly, and they can be easy to care for.

Another Interesting Read: How To Pick Up A Bearded Dragon?

Can a Bearded dragon run quite fast? Yes, when they need to. Bearded dragons can run up to nine miles or even 10 mph. This is much faster than the average person can run, so if you ever see a bearded dragon running, it’s best to let it go and not try to catch it.

Bearded dragons are able to run so fast because they have long tails that they use to help them balance. Bearded dragon also has strong two hind legs that help them propel themselves forward. They have four legs. When a bearded dragon is running, it may look like it is only using its back legs, but its front legs are actually helping to push it along as well.

There are many factors that contribute to the top speeds of the bearded dragons. One factor is their long tail. The tail helps them to keep balance while they are running. They also have strong back legs that help them to push themselves forward.

Another factor that contributes to their speed is their weight. Bearded dragons are not very heavy, so they do not have to carry a lot of weight with them when they are running. All of these factors together make the bearded dragon one of the fastest reptiles in the world. If you ever see one running, it is best to let it go and not try to catch it.

How Fast Can a Baby Bearded Dragon Run?

The reason that baby bearded dragons can’t run as fast as adults are because they are not yet fully grown. They have smaller bodies and shorter tails, which makes it harder for them to keep their balance while running. Additionally, their legs are not yet as strong as an adult’s, so they can’t propel themselves forward as quickly.

Even though baby bearded dragons can’t run as fast as adults, they can still move pretty quickly when they need to. If you see one running towards you, don’t worry – they’re not going to be able to outrun you! Just let them go on their way and they’ll be fine.

Why Do Bearded Dragons Run?

There are a number of reasons why bearded dragons might run in the wild. They could be trying to escape predators or they could be searching for food. In some cases, they might just be moving from one place to another.

Bearded dragons are fast runners and can reach speeds of up to 10 miles per hour. When they run, their legs move in a staccato pattern and their tails whip back and forth. This helps them to maintain balance and keep pace.

While running might not be the most natural thing for a lizard to do, it is an important part of their survival in the wild. By understanding why these animals run, we can better appreciate the role that movement plays in their lives.

Bearded dragons are one of the most popular reptilian other pets in the world. They are easy to care for and make great companions. One of the many things that people love about bearded dragons is their ability to run on two legs. This amusing trick is sure to get a laugh out of anyone who sees it.

The best way to do this is to start by having your dragon stand on its hind legs. You can help them balance by holding onto their tails. Once they are standing, slowly start moving your hands away from their tails. As you do this, encourage them to run by clapping your hands or calling their name. Be sure to praise them when they do it successfully.

With a little patience and practice, you will be able to teach your bearded dragon to run on two legs!

Why Do Bearded Dragons Run Away From Their Owners?

There are a few key reasons why bearded dragons may run away from their owners. The first reason is that they are seeking out food. Bearded dragons are naturally opportunistic feeders and will take advantage of any food source they can find.

If they see their owner eating something, they may try to steal it! Another reason why bearded dragons may run away is to escape from perceived danger. If they feel threatened or scared, they may try to flee the scene.

Finally, bearded dragons may also run away simply because they are curious and want to explore their surroundings. They may be drawn to something new and exciting that they see outside of their enclosure.

If you think your bearded dragon is running away because they are seeking food, try to offer them more food options within its enclosure. If you think they are running away due to fear or anxiety, try to make their environment as calm and safe as possible.

Inland bearded dragons and some other lizards are well-adapted to life in harsh conditions and are often seen basking in the sun on rocks or climbing trees in search of food. Bearded dragons are omnivorous, meaning they will eat both plants and animals.

While the speed at which a bearded dragon can run is impressive, it’s not the only thing they’re capable of. When faced with danger, these lizards are also known to puff up their beards and open their mouths wide in an attempt to look more intimidating.

This behavior is usually enough to scare off most predators, but if that doesn’t work, they’re not afraid to put up a fight. Bearded dragons have been known to bite and even whip their tails at anything that threatens them.

Conclusion – How Fast Can a Bearded Dragon Run

There you have it how fast can a bearded dragon run. Bearded dragons are fast runners and can reach a maximum speed of up to 10 miles per hour. When they run, their legs move in a staccato pattern and their tails whip back and forth. This helps them to maintain balance and keep pace.

While running might not be the most natural thing for small lizards to do, it is an important part of their survival in the wild. By understanding why these animals run, we can better appreciate the role that movement plays in their lives.

How Many Crickets To Feed A Bearded Dragon?

How Often Should A Bearded Dragon Poop?

How To Train Bearded Dragon