Do Bearded Dragons Know Their Name?

Bearded dragons are popular pet reptile that has many unique behaviors. Do bearded dragons know their name? One of these is the ability to learn their name, and respond! Just like humans, they will come … 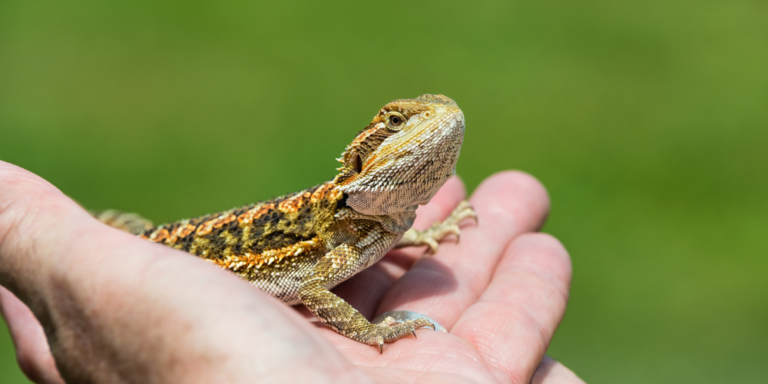 Bearded dragons are popular pet reptile that has many unique behaviors. Do bearded dragons know their name? One of these is the ability to learn their name, and respond! Just like humans, they will come when you call them. Imagine being able to train your bearded dragon to do tricks or even just acknowledge your presence? That’s pretty cool, huh?

There is some debate over whether or not bearded dragons actually recognize their name. Many people believe that it’s possible for them to do so because of the fact that they are highly intelligent creatures. Others argue that it’s simply a Pavlovian response, where they have learned to associate hearing their name with getting food.

Another Interesting Read: How Many Crickets To Feed A Bearded Dragon?

Despite the debates, there are a few things we do know about bearded dragons and their name recognition. One of the main pieces of evidence that suggests that bearded dragons may be able to recognize their own name is their use of vocalizations. Many people believe that these vocalizations are actually a way for them to communicate with humans.

It is hypothesized that bearded dragons do in fact know their name. This is due to the capabilities of this reptile such as detecting sound and color and responding accordingly.

For example, many owners have reported that their bearded dragon will walk toward them when they call its name or will look up when they say its name. Further research will be needed to fully understand this phenomenon, but the initial evidence shows that bearded dragons may have a higher level of intelligence than we previously thought.

They Learn Their Name by Associating it With a Reward

Bearded dragons are interesting creatures and can learn from their surroundings. They might not understand the importance of what we call them but they will catch on to how our name for them impacts how we interact with them.

For example, a bearded dragon that is called by its name may be more likely to seek out attention from its owner. They might even get food or other rewards in response to their name.

It’s not clear whether bearded dragons are aware that they are being called the same name each time, but they do seem to learn with repetition. And they certainly understand the connection between a reward and our chosen moniker!

You Can Teach Your Bearded Dragon to Respond to Its Name

Bearded dragons are intelligent creatures that can be trained to respond to their names. Like most animals, they learn best through positive reinforcement, so it’s important to reward your dragon when it responds correctly. Here are a few tips to get started:

Tip #1. Use a Reward That Your Dragon Likes

Bearded dragons have very different personalities, so it’s important to choose a food or toy that your dragon will enjoy. Some bearded dragons like grapes, while others prefer crickets. Try several different options and see which one gets the best response from your lovable lizard!

Whenever your bearded dragon responds to its name, make sure to give it a treat or some other form of positive reinforcement. This will let your dragon know that it’s doing something right and help it to keep up the good behavior.

Tip #3. Be Consistent With Your Training

Bearded dragons are creatures of habit, so it’s important to be consistent with your training. Choose a time each day when you can devote some attention to teaching your dragon its name, and try to stick with the same schedule every day. If you’re consistent and use positive reinforcement, your dragon should quickly learn how to respond when it hears its name.

While it can be tempting to yell at or punish your bearded dragon when it does something wrong, this is rarely the best approach. Not only will yelling and punishment not get you the results you want, but they can also damage your bond with your lizard and cause it to become afraid of you. Instead, try redirecting its attention to something else or rewarding it when it makes a good choice.

Training your bearded dragon to respond to its name can take time and patience. Don’t get discouraged if it doesn’t seem to be getting the hang of it right away. Just keep at it, and eventually, you’ll see results!

Can bearded dragons learn their name? Yes, with a little patience and some positive reinforcement, you can teach your new friend to respond to its name. Soon you’ll be able to enjoy watching your dragon interact with the world around it!

Your dragon will become used to the sound of your voice and the way you say its name. If you consistently use the same voice and tone when calling your dragon’s name, it will be more likely to respond to you. Dragons are very intelligent creatures, and they can tell if you’re using a different voice or tone than usual.

So, if you want your dragon to come when you call its name, make sure to use the same voice and tone each time. It may take a little bit of practice, but it’s worth it in the end.

When it comes to calling your dragon’s name, using the same voice and tone is essential. Not only does this make it easier for your dragon to respond to you, but it also helps create a stronger bond between you and your pet. Dragons are highly intelligent creatures, so they can tell if you’re sincere or not.

Reward your dragon when it responds to its name by giving it a favorite treat or letting it play with one of its favorite toys. With lots of training and patience, your Bearded Dragon will quickly learn that responding to its name is the best way for it to get attention and rewards from you.

How Do Beardies Recognize Their Owners

The bearded dragon likes to eat a wide variety of delicious fruits, insects, and vegetables. The bearded dragon feels most at home in an enclosure that contains sand, rocks, and branches. Use the same tone to make it easy for your beardies to learn their names. Dragons recognize their owners’ voices, and you can train your dragons to respond to their names.

A licensed veterinarian should be consulted for the diagnosis and treatment of any medical conditions. Begin talking to your bearded dragon as soon as you bring it home. Great pets for both kids and adults, bearded dragons are a wonderful addition to any home. Owners’ voices are the most important to them.

Watch tv with them, read to them, and generally just spend time around them so they get used to your voice. They are even-tempered which makes them great for handling by both kids and adults.

Certain behaviors, like arm-waving, may mean your bearded dragon is hungry. The same way you would with a baby, gradually increase the volume of your voice until you are almost yelling. Beardie dragons are social animals and will respond to their name when it is said.

Bearded dragons can learn their name if you use positive reinforcement and are consistent with your training. It’s important to use the same voice and tone each time you call your dragon’s name so that it can begin to associate that sound with itself.

Bearded dragons are intelligent creatures, so they will quickly catch on if you’re sincere in your efforts to train them. With a little patience and plenty of treats, your dragon will be responding to its name in no time!

Do Bearded Dragons Get Bored?