Bearded dragons are not poisonous, but they can be harmful if they are not handled properly. Are Bearded Dragons Poisonous? If a bearded dragon feels threatened, it may try to bite you, and its teeth … 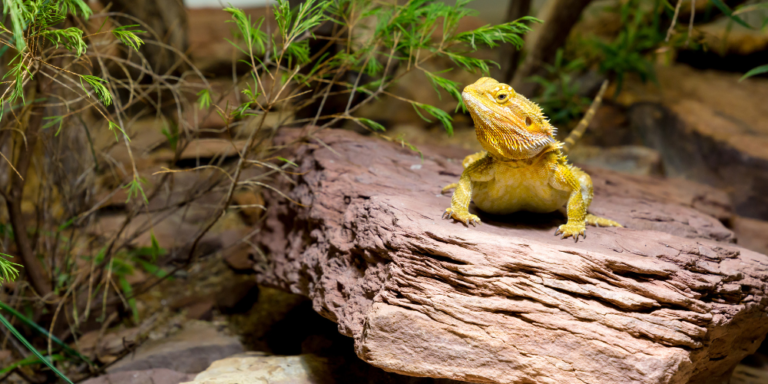 Bearded dragons are not poisonous, but they can be harmful if they are not handled properly. Are Bearded Dragons Poisonous? If a bearded dragon feels threatened, it may try to bite you, and its teeth are sharp enough to break the skin.

Additionally, bearded dragons can carry bacteria on their skin that can cause infections in humans. If you are bitten or scratched by a bearded dragon, it is important to clean the wound immediately and seek medical attention if necessary.

Another Interesting Read: Are Red Lights Bad For Bearded Dragons?

In general, however, bearded dragons are not poisonous and can make great pets for those who are willing to care for them properly.

The Venom Of the Bearded Dragon

Bearded dragons are kept as pets by many people, including kids and adults. These lizards can be easy to care for but there is a risk involved with keeping them, which relates to their venom. While not deadly, the venom of bearded dragons can deliver a nasty bite that causes pain and swelling.

The good news is that this problem is easy to prevent and treat with a few simple steps. When handling a bearded dragon, it is necessary to be aware of their venom and how to avoid being bitten.

Learning about the dangers of bearded dragons’ venom can help anyone who is considering keeping one as a pet. This information also helps kids understand why they should not taunt or tease these lizards in order to try and get them to “bite.”

Are All Lizards Poisonous?

No, not all lizards are poisonous. In fact, most lizards are not poisonous at all. However, there are a few species of lizards that are venomous, and these can be dangerous to humans if they are not handled properly.

The Gila monsters and the beaded lizard are two of the most venomous lizards in the world, and their bites can be fatal if not treated immediately. If you are ever bitten by one of these lizards, it is important to seek medical help right away.

There are also a few other lizard species that have mild venom, but their bites are not usually serious and will not cause any lasting damage. These lizards include the Komodo dragon, the monitor lizard, and the Gila monster.

Bearded dragons are popular pet lizards, and they are not poisonous. However, they can still give you a nasty bite if you’re not careful. So, while not all lizards are poisonous, there are some that you should be aware of. If you’re ever unsure, it’s always best to err on the side of caution and stay away from these venomous species.

What Happens When a Bearded Dragon Bites You?

Bearded dragons generally use their teeth as a defensive mechanism rather than an offensive one. But if you’re not careful around this feisty animal, it could potentially harm you with its sharp teeth.

The consequences of a bearded dragon bite will depend on the size and age of the lizard, as well as how deep the teeth penetrated your skin. A small nip from a juvenile bearded dragon won’t cause much more than a superficial wound.

But an adult lizard can do some serious damage, especially if its teeth puncture deep into your flesh. In severe cases, a bearded dragon bite can even result in infection or loss of tissue.

If you’ve been bitten by a bearded dragon, the first thing you should do is clean the wound and apply an antibiotic ointment or bandage to the area, especially if it’s bleeding. Once the wound has been treated, you should seek medical attention as soon as possible.

When Do Bearded Dragons Bite?

Bearded dragons are relatively docile creatures, but they may bite if they feel threatened. If you have a bearded dragon as a pet, it’s important to know when and why they might bite so that you can avoid being bitten yourself.

There are several reasons why a bearded dragon might bite. One reason is if they feel threatened or scared. If you approach them too quickly or make sudden movements, they may feel like they need to defend themselves and will bite.

Another reason is if they’re trying to protect their territory. Bearded dragons are known to be very territorial, so if they feel like someone is invading their space, they may bite.

Finally, bearded dragons may also bite to protect their food. If you come across your bearded dragon while they’re eating, it’s important to give them the space and respect that they need so that they don’t feel like they need to defend themselves by biting.

Can a Bearded Dragon Bite You?

Yes, a bearded dragon can bite you. However, it’s important to remember that they generally only bite when they feel threatened or scared. If you approach them carefully and make sure not to startle them, you’re unlikely to get bitten.

Do Bearded Dragons Have Venom Land?

There is no solid answer to this question as bearded dragons do not possess venom glands. However, there are some anecdotal reports of bearded dragons biting and subsequently injecting their prey with a clear, sticky substance that may be their saliva.

Because there is no official research on the matter, it’s difficult to say for certain whether or not bearded dragons can inject venom through their teeth. There are several possible explanations for how bearded dragons may be able to deliver a venomous bite, even without venom glands.

For example, some researchers believe that the secretions from bearded dragon saliva contain toxins or enzymes that can cause discomfort and swelling when injected into prey animals. Others point to studies on related lizard species that indicate that their saliva is filled with powerful prey-killing enzymes, which may be responsible for the effects of a bearded dragon bite.

Is It Safe to Kiss a Bearded Dragon?

Whatever your first impression might be, one thing is for certain: bearded dragons are charming creatures that capture people’s hearts from their very first glance.

But can these lovable lizards be kissed? This is a question that many people ask, and it’s not as straightforward as you might think.

The simple answer is that yes, you can kiss a bearded dragon. However, there are certain things you should keep in mind before planting one on your scaly friend.

One thing to keep in mind is that bearded dragons are very sensitive to change. If you suddenly introduce something new into their lives, such as kissing them, they may not react favorably and could even become aggressive or scared.

Are bearded dragons venomous? They are not venomous. They do have small, sharp teeth that they can use to bite if they feel threatened, but their bites are not poisonous and will not cause any lasting damage.

Although bearded dragons do not have venom glands, it is still possible for them to deliver a painful bite that may require medical attention.

However, if you approach them carefully and make sure not to startle them or invade their space, there’s no reason why you shouldn’t be able to enjoy the company of your scaly friend without fear of being bitten.